I've been holding out! 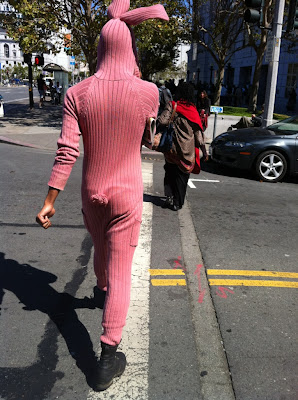 I've had this since Thursday evening. My co-worker walking into the library behind this individual this past Wednesday morning around 11:15am. My co-worker said the guy was just walking around on the first floor.

I never saw him on the 3rd floor, so I don't know how long he stayed in the building.
Posted by Nexgrl at 8:19 PM 4 comments:

I'm glad that it wasn't me!

Yesterday morning, the teen librarian was checking the teen center, to make sure everything was okay. You know, no perverts hanging out, no criminal behavior, things of that nature.

What you ask did she stumble upon for me to entitle this post "I'm glad it wasn't me?"

Sitting near them were some develop mentally disabled adults and their monitor.

What did the librarian do, you're wondering? She screamed, "WHAT THE HELL DO ARE YOU DOING!!!" She starttled the teens, knocked the monitor out of her daze, and caused the security officer to run over to the area.

The security officer took over the situation from there.........The teens claimed that the female was simply "resting her head."

Today, the teens returned. When the same librarian approached them because they were yelling, the male told her that she should appologize for her language yesterday. She did appologize to the teens, and they in turn appologized to her. They're sticking to their story that all the female was doing, was resting her head in the male's lap, face down.
Posted by Nexgrl at 9:09 PM 3 comments:

Change is around the corner

My supervisor is retiring in two weeks. This means that our floor will then be short two supervisors. It also means that his work schedule is up for grabs. I found out today that the most unreliable supervisor will take over his schedule.

This is the same woman who scheduled herself to work one Sunday and didn't show up (She didn't call either.) The following Tuesday, she arrived to work and said, "OH, I forgot." Really, and you're a part of the management team? She was the acting Chief of the Library that day. This not only put a strain on our floor, but the whole library. A manager from a different floor had to step in and be the acting Chief. It left my floor short staffed. We had to scramble and put together a new desk schedule, in addition to closing one of the reference desk. It is my opinion that this woman shouldn't be allowed to work a Sunday shift EVER!

When my co-worker told me that the lady decided that she wanted to be the Sunday Floor Manager, I said, "Well that's not going to do us any good. We will be all alone again."
Posted by Nexgrl at 6:27 PM 2 comments: