Nothing new just another odd interaction

Wednesday afternoon, I arrived at the reference desk and there was a man standing there. He said he was looking for pg. 502. Now you'd think, that question would have made me turn around, but no, I tried to figure out what he was talking about.

I asked the man what type of book the page was located in. He kept repeating the page number and telling me that he found it at the other library. After about 2 minutes, I finally got some useful information out of him. The problem was, in between the regular questions/statements, he would blurt out, "Breaker, Breaker, 19," or he would start mumbling about female serial killers.

In the end, what he wanted was the Chronicle Yearbook for the 20th Century. We had a copy, but he was upset because he couldn't find the latest edition of the book.

Thursday, I found out how female serial killers became an addition to the man from Wednesday's ramblings. There were two African American Women who were doing research on female serial killers. One of the women had returned and I told her that I hoped she didn't bring that man with her. She said, she and her film partner were in the education room, and he heard them talking about female serial killers.
Posted by Nexgrl at 11:50 AM 3 comments:

Look what I found

Yesterday, a patron approached the desk, he complained that a man was eating near him and the chewing was irritating him. As I was walking the aisle, to see what/who the problem was, I found something similar to this 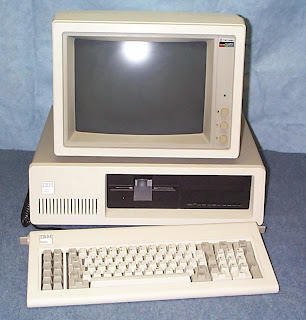 Everything was plugged in and it looked as if it had been used. I was so stunned, that when I returned to the reference desk, I told my co-worker, "I could explain it to you, but I wouldn't do it justice. You have to go see if for yourself." She walked over there and returned to inform me that she was going in the staff area to inform my boss. He came out and asked the guy(by that time the patron had returned) how he was able to bring the computer inside.
Posted by Nexgrl at 9:18 PM 2 comments:

For the past three years, my selection area for the library has been 800's. This means poetry, plays, American literature, and foreign translated literature. Well, as of June 1st, my order area has changed. I now handle selections for education( 370-379,) and occult, self-help, astrology (100-199, basically the area where the books go missing.)

At first, I thought, my boss suggested this so that I could have a change of pace. This week, I began exploring my new order areas. There is an Education Center attached to whoever handles that call number section. Well, it has been taken over by some strange folks. To ensure that the center is all theirs, they intimidate whoever goes in there to actually do research. I've gone in there a total of three times this week to re-stock the pamphlets. The first two times, the men were giving me crazy looks and I returned the same crazy looks, all the while I kept doing my thing. Yesterday, a couple was in there arguing. Well the guy threatened that if he left, he wasn't coming back. Since he was getting ready to use his cellular telephone, I had to burst both of their bubbles. I told him, "If you going to use that, you can't do it in here. You have to go out to the elevator area to use your cell phone." They both looked at me as if I had just spoken out of the left side of my head.

My cubicle is now crowded with education materials. I told my boss that I couldn't have that. He told me to store everything in the storage closet. I went into the closet Wednesday and discovered that I would have to clean it out in order to use it. There were boxes and boxes of education documents from two years ago. The past selector, opted not to clean the closet and to store everything at her desk. I began tossing boxes of stuff into the recycle bin. I had to stop, put on a dust mask and plastic gloves because it was so dusty and dirty.

Yesterday, I told my boss that he gave me those order areas because he wanted me to clean them up. You see, three years ago, I cleaned up the 800's. Yesterday, I began to look at job openings in my field in other parts of the country. He asked me if I was considering moving. I told him that I have to do something.
Posted by Nexgrl at 10:02 AM 2 comments:

Well folks, once again the end of our physical year is nearing and I found myself having to scramble. I received notice at the end of April that I had 64 hours of Holiday In Lieu pay that must be used by 6/30/2009, or I will loose them.

I checked the vacation datebook, and there were no consecutive days available. Since I hate getting up for work on Monday(I don't know why, because it's my 2nd day of the work week,) I have scheduled 3 Mondays in June off. In addition, I have taken two Sundays off as well.

I must say, it feels real good to have a short work week.
Posted by Nexgrl at 10:47 PM 3 comments:

Last Wednesday was a doozy. After two yelling and shoving incidents, we called security because it sounded like it was about to go down. They arrived, told one man to leave, he walked away no problem. The other guy, well, he refused to leave. They had to restrain him with those plastic handcuffs. He had the nerve to yell and scream as they were shoving him into the elevator.

As soon as the floor was clear and quiet, lo and behold the first guy resurfaced. We then found out that he was the trouble maker. Once again, there was shouting and shoving. We called security again and were told that they were still dealing with the other guy.
It seems that homey was walking around the 15-minute express terminals
exposing himself. As if that wasn't bad enough, he had crabs and they were
visable.
Posted by Nexgrl at 10:38 PM 4 comments: