So you think it's my fault

Yesterday, a couple was sitting at one of the internet computers near the reference desk.

The guy approached the desk and said, " My girl needs your help. She can't log on to the computer."

As I walked over to her, he said, "We are scheduled to attend the basic internet instruction class tomorrow and I told her that she should just wait until tomorrow."

I explained to the woman how to log onto the computer. I then asked her what website she wanted. She said fb. I logged her onto fb, thinking she had an account. NOT. I told her that she would have to set up an account before she could enter the site.

WELLLLLL, it turned out that she didn't have an email account. She wanted to make up a fictitious account. I told her that she should just set up an email account and then set up her fb account.*****Meanwhile, ol boy is mumbling behind me that she needs to just wait until they attend the internet class.

She said that she wanted her email account to be with y*hoo. I showed her where she needed to be and told her to follow the set-up instructions. I believe the main problem was comprehension. The guy came back over again and said that she was having problems and I needed to help her one more time. I told him that she would probably need more help, but it's okay.

As I explained to her why her password wasn't acceptable and why they asked for a second email address, ol boy was behind me snickering once again. He was saying she needed to wait. I turned around and told him that he needed to STOP SNICKERING, BECAUSE HE WOULD BE GOING THROUGH THE SAME THING IN THE BASIC INTERNET CLASS.

I went to help someone else. As I was returning to the reference desk, ol boy stopped me and said, "She thinks that you said I was laughing at her." I told him, "No, that's not what I said you were doing. You were continuously mumbling that she should wait until the class and I told you to stop."

He then said, "Well, now she's mad because she thinks I was making fun of her." She had stormed off and was yelling at him at the elevator. All I heard was, "OH I DON'T KNOW ANYTHING AND I CAN'T DO ANYTHING."

She just wanted a little knowledge before attending the class. I understood that, but obviously he didn't.
Posted by Nexgrl at 12:45 PM No comments:

They did it again 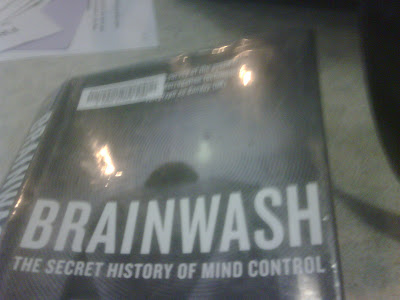 This was on my desk when I arrived to work this past Sunday. Some thoughtful patron left the book jacket along with the call number and the barcode. This does make it easier to locate which book is missing. I marked the book missing and ordered a replacement copy.

This time, the book will probably be shelved in the staff area. Main floor shelving is no longer an option.
Posted by Nexgrl at 12:41 PM No comments:

Last Monday, three men were in the library together. I found out after the fact that they were together.

I watched a man doze off and on for a half hour. Finally, he began to snore. I walked over to him and said, "My only problem with your behavior, is that now you've begun to snore." As I was doing this, one of his friends yells from one of the Internet computers, "You're sitting in the front, you have to watch what you do!"

They kept going back and forth about the problem with black women.
When my co-worked returned to the reference desk, I told him what the men were doing and how annoying it was. I knew that they were doing it just to work my nerves. My co-worker walked over and had words with them. I didn't ask what was said, but they stopped talking.

Sunday was a nice day. Relatively hot(for this city,) and the library was crowded all day.

A patron called and began to argue with me about the way in which a book was classified. She had given me the wrong title. When I finally found what she was talking about, she told me I was wrong. After searching the shelves for another title, she then told me that she didn't want to place a hold on the book.

Yesterday, I had to speak to a man watching p*orn. The public monitors are 17" Flat screens that are raised. Each time that I turned to my right, I saw a woman's legs spread with a man's head in between. I walked over to the man and said, " I believe in free speech and that everyone is entitled to look at whatever they want on the Internet, but I'm don't want to see that." This fool said, "It just popped on the screen." That man had been selecting different windows for at least 20 minutes.

After his hour was up, he came to the reference desk and starred at me, looking me up and down. I finally said, "Do you have a reference question?" He then said, "I'm sorry." I said, "Yeah, okay."
Posted by Nexgrl at 3:31 PM No comments: